The business of email. 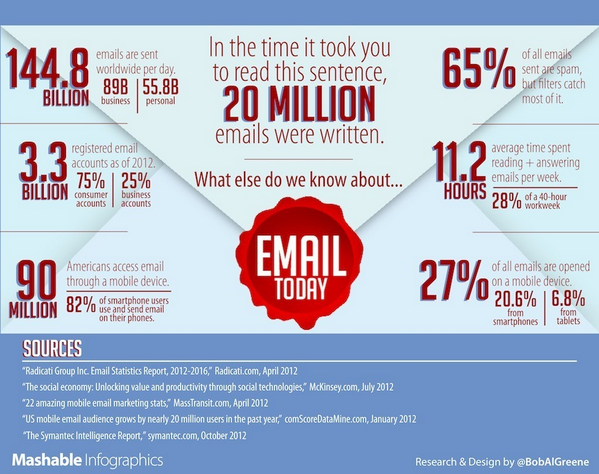 Have you ever wondered about the history of the email system that you likely use every day?

1971: U.S. programmer Raymond Tomlinson allegedly sent “QWERTYUIOP” as the first network email, and he was the first to connect his computer to his mailbox by using an “@” symbol.

1981: The American Standard Code for Information Interchange adopted a process of letters, punctuation and symbols to digitally store information.

1985: Government and military employees, students and academic professionals were common email users in the mid-1980s.

1991: ISPs allow widespread Internet access, but there were limited options for use until Tim Berners-Lee created the World Wide Web in 1991.

1998: “Spam” was added to the Oxford English Dictionary after its growth in the mid-1990s — not to be confused with the 3.8 cans of Spam consumed every second in the U.S.

1991: Astronauts Shannon Lucid and James C. Adamson sent the first email from space on a Macintosh Portable: “Hello Earth! Greetings from the STS-43 Crew. This is the first AppleLink from space. Having a GREAT time, wish you were here,...send cryo and RCS! Hasta la vista, baby,...we'll be back!”

1993: IDM and BellSouth marketed the first PDA-functioning 20-ounce cellphone, which sold for $900 and served as a phone, calculator, fax, email device and pager.

2003: The RIM 850 and 857 original BlackBerry smartphones were released, revolutionizing the mobile platform by concentrating on email.

2004: President George W. Bush signed the Controlling the Assault of Non-Solicited Pornography and Marketing Act of 2003 into law, which gained criticism for its lack of action against spammers.

2008: President Barack Obama became the first president to use mobile email and admit his addiction to his BlackBerry, and despite security concerns, he currently uses it in office.

2011: A study finds the worst email passwords are password and 123456. Others worthy of note: QWERTY, monkey and letmein. The password 123456 was also found to be the most common password during a 2012 email hack.

2012: There are more than 3 billion email accounts across the globe, and approximately 294 billion emails are sent per day. Roughly 78% of them are spam.

Corporate employees send and receive an average of 105 emails a day. That's 28% of a work week.

Time-management experts recommend scheduling time in your day to manage your email inbox, just like you'd schedule a meeting.

Depending the level of necessity for your job, devote one, two, or three times a day to read and reply to emails.

And if you're able to (if your boss doesn't regularly summon you via email with things like "I'm in the kitchen, please come in now for a chat"), close your email program completely during the other times of the day.

That way you're not tempted to peek, and you aren't distracted by the "incoming" alert.

(Stats via Mashable and Mashable)